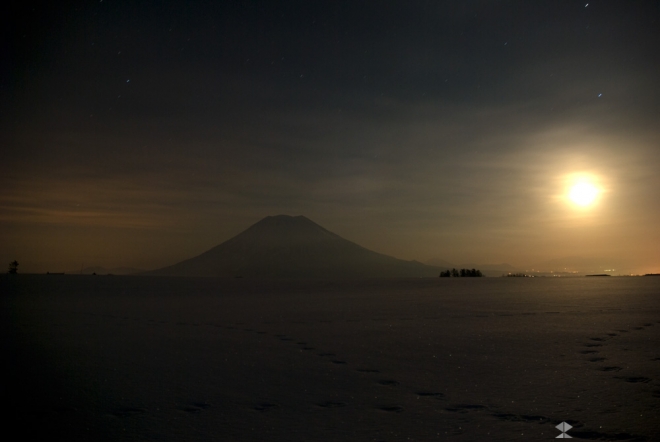 There is something special about undertaking an activity under a full moon. This particular fullmoon challenge was an attempt of Hokkaido’s Mt Fuji, ‘Yotei-zan’ for a summit sunrise. Mt Yotei is an almost perfectly shaped dormant volcano that lies within view of Niseko, Hokkaido’s powder capital. Standing at 1989m it’s not a formidable mountain but like all mountains, conditions can change in an instant and needs respecting. A couple of moons had passed and the typical Hokkaido winter had not presented a clear window for an attempt. When this moon appeared, with only light cloud forecasted, the call was made... ‘Let’s go!’

Two companions and myself piled gear and ourselves into the temperamental Toyota Surf, and with excitement in the air we laughed our way out of Sapporo. We passed through light snow flurries late in the evening and it wasn’t until we stopped at Nakayama Pass that we were able to view Yotei under the rich glow of the rising full moon. Werewolf style yowls were common place for the rest of the evening as we drove to the mountain’s base. ‘Yeeeeeeeooooow!’

The car lights and engine were turned off and a deep, deep silence presented itself. We were here. Packing, repacking, double checking our gear, we waited for our eyes to adjust to the darkness. The moon was still low and hidden behind the trees. Snowshoes on, boards strapped to our backs, poles extended, we were off.

A mystical feeling is present in the trees in Japan, and this was heightened at night, as we crunched our way up the gentle slope. The moon’s rays streamed occasionally through the trees amongst dark shadows and occasional noises emerged from outside of eye’s sight. We continued through the darkest hour of the night, which also coincided with the steepest part of the hike. The full moon was bright and we had no need for headtorch light, though careful placement of the serrated edges of our snowshoes was needed to avoid losing balance when crossing tree-wells. Whilst ascending a mountain at night, it is difficult to judge the steepness of the slope and for that matter have any fear of what is below, simply because it can’t be seen. This can be both positive and negative. Using the positive whilst paying constant attention to knowing where we are and what the consequences could be, allowed us to safely reach Yotei’s crater rim. We hadn’t judged our arrival perfectly as we had to wait a short time for the sun to appear over the horizon, and even then low cloud blocked its warmth. This truly was the land of the rising sun.

We were eager to move again to get warm. We positioned ourselves above our route, but the slope itself was out of sight. Checking everything was attached to our packs, our bindings straps tightly hugged our boots. There was a moment when we each looked at each other in silence, as to question... ‘Who is going to go first’? The most experienced automatically took the lead and we started our descent. The sound was incredible after the still of the night. All winter we had been free from this sound. It was the sound of chatter. Edges and riders that have only known powder all season quickly had to adjust to the conditions and attempted to grip the snow and escape the worst of the ice. From within this alpine zone, the matchstick figures of trees were distinct below despite how far away they were. The steep gullies that fed into the trees brought the focus immediately back to the task at hand - navigating through the ice and maintaining an edge. We all knew this was a no fall zone.

I looked across at Ben who made a jump turn, and then another. Gripping his shortened pole in place of an iceaxe, I could image his white knuckles underneath his glove, holding on tight. He was ready to use this somewhat insufficient tool in an instant. His confidence grew as he noisily negotiated the crux of this route. We followed cautiously. Once passed the sun-baked ice from the previous day we entered the sparsely scattered trees, which offered some gripable snow and we, all relaxed and were able to link some turns. Cold, noses dribbling, with adrenaline pumping through our veins the slope eased and we regrouped and joked with relief that we had for the most part achieved our goal. We weaved through the trees seeking powder stashes were we could and headed for the carpark.

Back in Niseko, we stopped at the local convenience store and bought obligatory beers. The day had only just begun to warm up, and in the sun, we sat together on the carpark curb, looking across to Yotei. Together we toasted 'kanpai' (cheers) to a successful fullmoon challenge.

* This story is dedicated to Ben. Leader and passionate outdoorsman. Never forgotten. 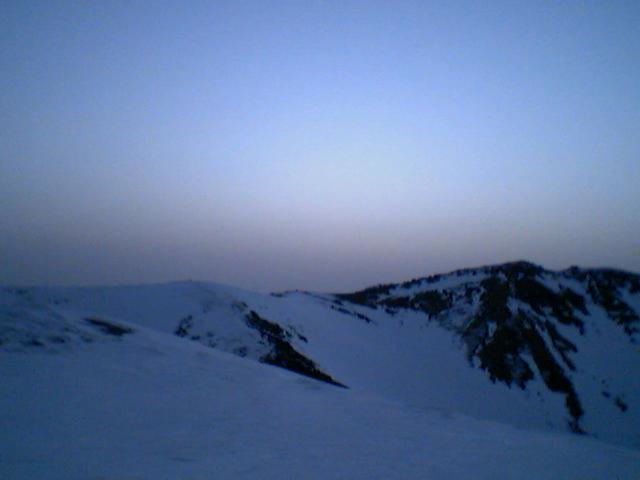 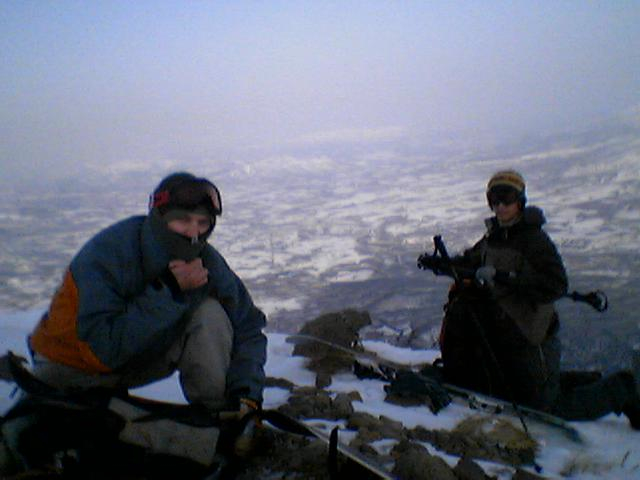 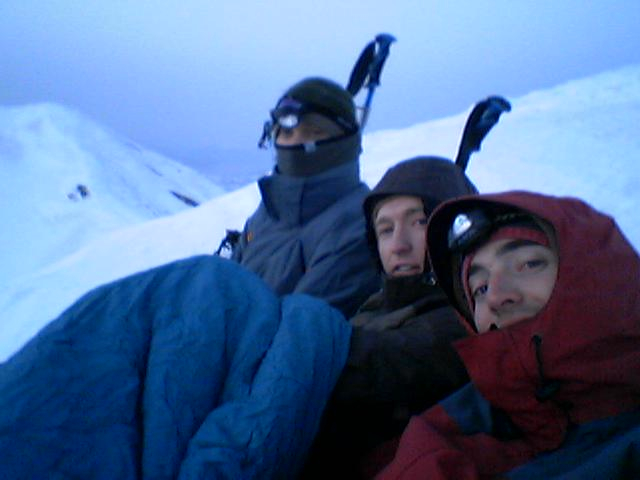